DMC Armenia: Armenia is a country filled with treasures, from amazing landscapes, ancient sights, delicious cuisine, stunning monasteries and rolling vineyards. It became the world's first Christian country more than 1700 years ago in 301 AD, and to this day is still blessed with amazing monuments, like the Greco-Roman Temple of Garn and the monastery at Geghardi.
Armenia straddles Europe and Asia which makes for their fascinating culture. It offers great views of the biblical Mount Arara (where Noah landed his ark), which is now technically part of Turkey. This famous mountain can be seen from the nation's capital, Yerevan, Armenia’s cultural center. In this vibrant city there is plenty of opera and theatre. Another hotspot  is Lake Sevan, a massive high-altitude fresh water lake (one of the largest in the world) with beautiful beaches.

Further down the page: Read about our company * Travel Facts. There is also a map, the best hotels for meetings in Armenia and program ideas for Armenia.

Armenia DMC
24/10 Parpetsi Street
0002 Yerevan
Armenia
This email address is being protected from spambots. You need JavaScript enabled to view it. 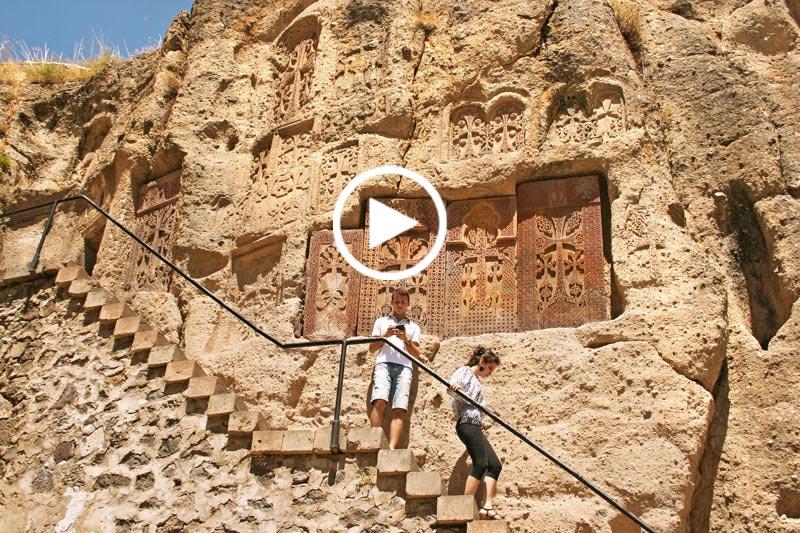 This cathedral was built in the 7th century. It was destroyed in the 10th century, however, its ruins are spectacular. They are included on Unesco's World Heritage List. A model in the on-site museum shows what it may have originally looked like.

Yerevan Brandy Company
Distillery in Yerevan
A fantastic distillery with guided tours and tasting. It dates back to the 19th century.

Geghard Monastery
This is a World Heritage site and is named after the holy lance that pierced Christ’s side at the crucifixion. This stunning monastery is carved out of the rock face of the Azat River Gorge. According to legends, it was founded in the 4th century and its oldest surviving chapel dates back to the 12th century.

Links to other DMCs in Asia

Boat tour in Sevan with beer and crayfish

We travel to Sevan, where a typical Armenian lunch will be served with traditional homemade Vodka. Lake Sevan is the largest alpine high mountain freshwater lake in our region. Today we will be fishing for Crayfish with professional fisherman. Afterwards we participate in a Master Class of fish barbecue.Visit the Map Winery. This attractive and hospitable cellar will be welcoming you during this visit. Here you can learn about our wines and the way they are produced. We have organised a beautiful wine tasting with typical Armenian snacks for you and your clients.

Armenia Hospitality DMC is an inbound operator for Armenia and Georgia.  We have a formidable team who can assist with both leisure and incentives. We have a top reputation in the market.

We cater to you and your clients for whatever your needs are, anything is possible through this strong, experienced, and professional team. We're strong in Armenia, but also in Georgia. Click here for more incentive, event and group programs in Armenia

Companies we did events for

Furthermore in our office:

Avoid paper work as much as possible. We use our ICT infrastructure to send invoices and quotes by email as PDFs or wetransfer.

We recycle where we can

We shut our computers and printers down after work or when not in use .

We encourage the use of low impact transport for travel to and from work or business travel.